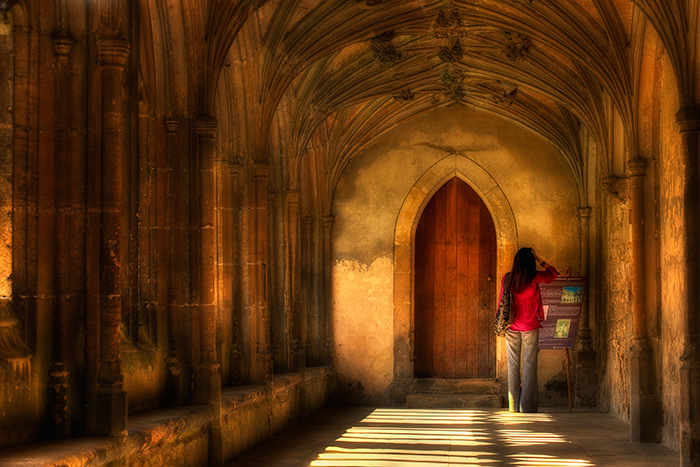 This image was taken in 2010 at Lacock Abbey, the home of William Henry Fox Talbot. The original (below) was shot in raw. I first made an HDR image by converting the raw file in Adobe Camera Raw at 0ev, +2ev and -2ev and using Photomatix Pro to create the image. This gave more detail, especially in the bright areas on the floor. I then worked on it in Photoshop CS3. I reduced the noise, made adjustments to get even more detail in the light on the floor using Nik Viveza. Next I used Nik ‘Darken/ lighten center’ to shift the emphasis to the figure and then the ‘Glamour Glow’ filter to create the slightly dreamy effect. A layer mask was used to reduce the effect on the figure. I cloned out some slight distractions in the stonework and adjusted the colours on the light on the floor to even them out, and I used a curves adjustment to produce the effect I wanted.

« The Man in the HatWaiting for the Underground »