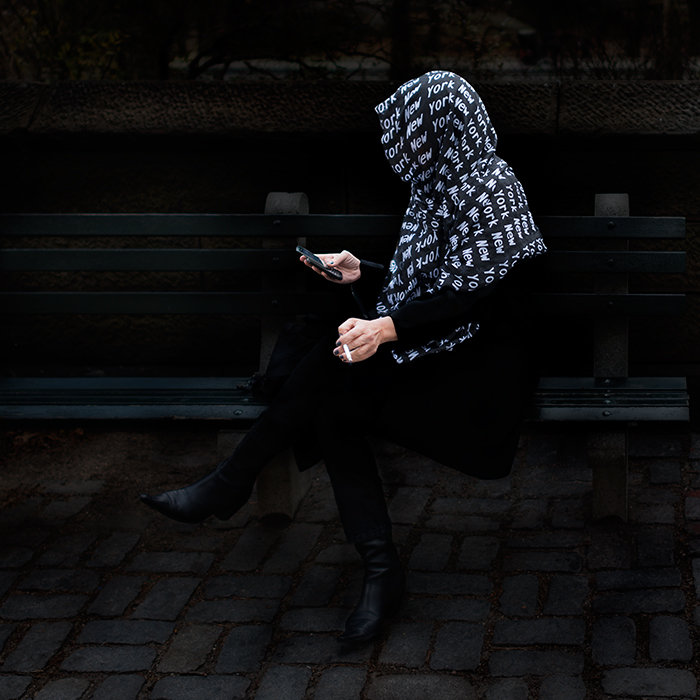 This is another shot from my New York trip for Christmas 2012. I saw the woman on the opposite side of the road just outside Central Park. I was fascinated by the headscarf which obscured her face from view and took the shot as I was walking across the Zebra crossing towards her.

When I got back home, I started work on the image and I realised very quickly that, for me, it was all about the scarf, the cigarette and the mobile phone so I set about trying to obscure all the extraneous material in the image so that it didn’t detract from the elements I wanted to emphasise (see the original image below).

First, I applied Photoshop lens correction and transform filters to straighten it all up then I cropped it to a square format. The Nik midnight filter was applied to create the look I wanted and a layer mask was used to bring back the scarf, hands, cigarette and phone. Then several Viveza and Curves layers were used to bring some of the detail in the background, and the clone tool was used to remove minor distractions. Finally, the image was sharpened using the high pass filter.

I wanted to leave as much of the interpretation of the image as I could to the imagination of the viewer so I called it ‘In New York’. I leave you to decide the exact meaning of the title too.

This image has had 2 international acceptances including the Tallaght International Salon of Photographic Art 2013. 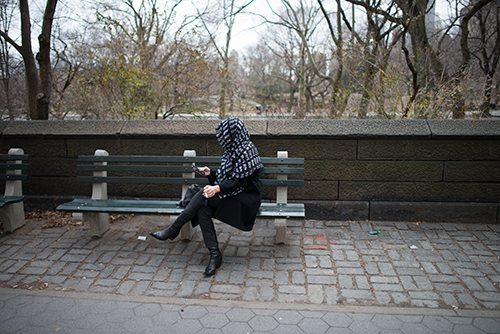 « A Pause for ReviewThe Gallery Attendant »