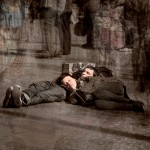 This was taken in Barcelona. The sleeping couple were lying in the middle of a plaza and the crowd were milling around them – just ignoring them. I wanted to create an image which depicted the movements of the people around the sleeping couple. The image consists of 8 shots taken a few […]